This blog is more for me than anyone as a reminder of these special, awful & unforgettable times, so I'm not going to apologize for the length of this post.

Olin & I went on a road trip to Iowa for Olin's aunt's wedding reception. We drove up through snow to Denver on Wed evening October 21st, stayed with our friend Eric, then drove to Iowa, on Thur the 22nd, Olin's 2nd anniversary of his 29th birthday. We drove through rain, sleet & snow the whole way. I should rephrase that. Olin did all the driving. Poor guy. We got to see Olin's mom & I got to meet Olin's cousin Kristle & her little baby Lawson. 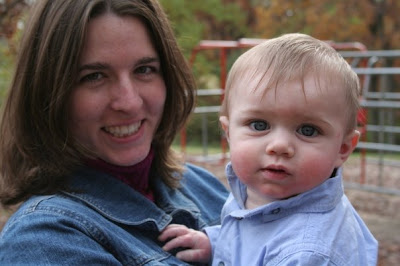 We drove home on Monday the 26th - LONG day. Enjoyed a pre-thanksgiving food drive that the pathfinder club did dropping off bags on Wednesday & picking up full ones on Sabbath afternoon instead of trick-or-treating. Enjoyed sorting the various food types. Didn't enjoy the phone call I got from my dad on Thursday the 29th. When I heard him sniffling on the phone, I thought grandma had passed away. Instead it was my cousin Ryan - killed in a motorcycle accident. Shock. Ryan was the youngest of all 11 cousins. We were all pretty close as kids. The pain that I felt was mostly of regret of not knowing him better but glad of all the time I'd had a privilege to know him. I just knew he'd make some girl really lucky one day. Such a sweet tender selfless person. Every animal loved Ryan. An unimaginable loss...

Sunday the 1st of November I flew to Orlando, FL via Phoenix. I had determined that tragedies, although unable to be undone, can sometimes bring about good things. I determined to make the most of my trip & I did. I enjoyed playing Carcassonne in the Phoenix aiport with you & Jeff, Cassandra. Thanks again for coming out!

Monday was spent surveying the vastness of the clutter at my dad's house. My mom & sis had flown in on Saturday. They stayed in my old room & I stayed on the futon couch in the living room. My mom scanned in pictures of Ryan from our old photo albums & I helped her pick out Bible texts for the pages of a photo book she was putting together on Walgreens.com for the family.

Tuesday was hard. We all (my dad, brother, sis, mom & I) piled in my dad's car & drove the 1 1/2 hours down to Avon Park. On the way, another car almost ran us off the road & didn't even realize it. My heart could barely handle it. The thought flashed through my mind in that instance that my ENTIRE immediate family was ironically going to be killed on the way to a funeral. Thankfully that didn't happen. We got down there & headed to the church just in time for the viewing. I was afraid to go in & see him in the casket. When I finally got up the courage to look, I realized it wasn't him in there & breathed a sigh of relief. It's just a shell & it didn't even look like him - swollen from having bled out, according to my uncle. The service & the ceremony were very touching. All but one of the cousins came & the aunts & uncles were there. The community support, the EMTs, the Firefighters, the Honor guard, the Motorcycle gang, the family, the letter from Ryan's mom that was read, the flowers, the cars that stopped on the side of the road out of respect, the bagpipes, the last call from dispatch for a fallen brother, the flag on his casket - I'll never forget any of it. I can't describe the mixture of peace & sadness. I don't fear for his salvation. His mom said he gave his heart to the LORD & followed up with classes & was part of a youth group. His salvation is in God's hands & I have peace about it. 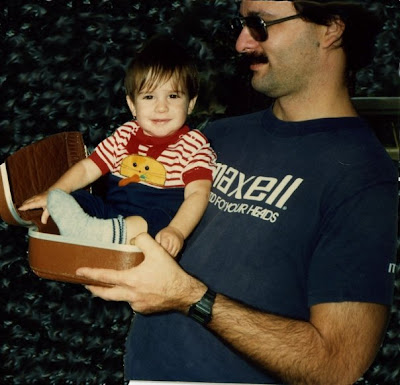 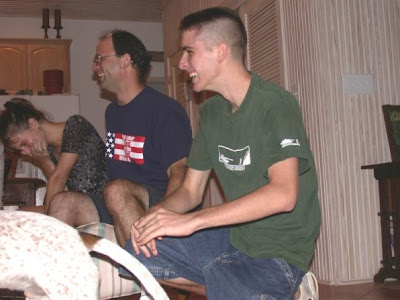 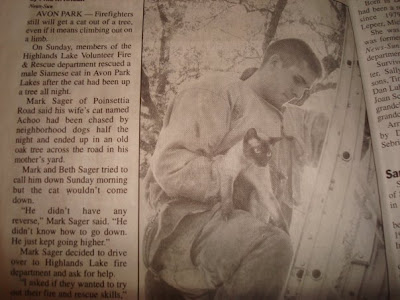 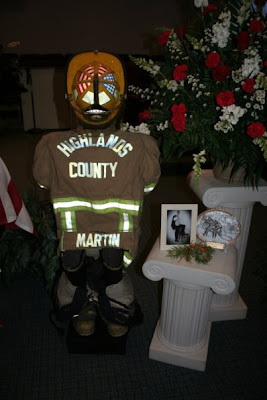 Wednesday I drove back down to Avon park to be with family some more. Priceless time. Visited with grandma in the nursing home. Shared stories with aunt Selma & grandpa. Shared with grandma how the service was & all the honor that was paid to Ryan. She broke down & cried saying, "What good does it do when they're gone?" This made me cry. It was her youngest grandchild & she commented on what a good boy Ryan was.

We went to my aunt Ruthie's for lunch & got to visit with my cousin Hank some. Aunt Sam & Tanya invited me to stay in their hotel with them so I did. My cousin Travis took us to the Olive Garden for dinner. We had some really great "Olive Garden therapy" there.

Thursday I visited my friend Jessica, who was my wedding planner. Met her 2 cute kids & was encouraged by her awesome parenting skills.

Friday mom & sis had to fly back to California. I was able to take Narcissa shopping first. We had a good time at the mall.

Friday evening my dad, brother & I went to see some old friends, the Neubranders. Tim & his wife were there & Michael. Ben & I grew up with them. We played at each other's houses, made forts, climbed trees, played hide & go seek in the grass in our back yard. Tim liked me & I liked Michael, who was younger than me. Go figure. It's fun to reconnect. We're practically siblings & we hadn't spoken in years.

Sabbath my Aunt Arlene came & picked me up & took me to the church retreat at Wekiva state park. So many familiar faces. I went to that church from Cradle roll on. Almost none of my peers are there anymore. Went canoeing with my uncle Mark. Stayed after supper for games. Saw some friends from Texas that I didn't expect to see & saw Luis Gracia, who was a task force worker/youth pastor at my church while I was in high school.

Sunday hung out at the house with dad. Monday shopped for some Indian groceries, picked up my favorite Bollywood movie, Kuch Naa Kaho for $1.50, visited with Luis at the church, went thrift store shopping with my childhood friend Amy. Took my brother out for dinner at his friend Jesse's cuban restaurant.

Tuesday flew back to Albuquerque via Atlanta (ALMOST didn't make my connecting flight due to Ida's weather system) then drove home. Got home just in time to get dressed in my pathfinder uniform & go to the church for a Veteran's program the school kids put on. What a nice program. I wish more people from the community had come but we were glad at how many came, especially the veterans.

Today was Veteran's Day & the Pathfinders put together a small parade downtown. Afterward, Les, Karla, Olin & I went to lunch. We had a nice visit but the subject was a tough one & my heart is heavy over some information they shared with us. I'm praying for them as they deal with a more than difficult situation today & in the upcoming days. It's really hard when you befriend someone & then find out they weren't who you thought they were. Olin & I had kept our distance & are fortunate not to have been emotionally invested but are feeling for those who did get invested in the friendship...
Posted by h2ovapor at 5:05 PM