Olin & I got a call from the Mundalls that they were going to have a church service at their house, planned & put on by the kids, & would we like to come? Before we went over, we went for a little walk.

After our walk we went over to the Mundalls. All the kids participated. Mattie did song service. Meghan & Olin both did Sabbath School. Liberty did prayer & praise. Mark did children's story. Meghan did the sermon. It was awesome! Afterward we ate lunch (haystacks etc). I got to visit some with Karla while Olin hung out with the kids, which was nice. It feels like it's been a really long time since she & I got to hang out.

Most of the afternoon was spent playing Probe with Bible words. We had sundown worship which just so happened to tie in perfectly with both Sabbath School AND church. God is awesome that way. Then we had some supper (pizza & more haystacks). We played a fun game of Junior Apples to Apples before heading home around 9:30 p.m. It was a good Sabbath...
Posted by h2ovapor at 1:15 PM 2 comments:

While watching 3ABN, a strange thing happened. It was the 25th Anniversary of 3ABN & they were having a special live program in Georgia. The main subject was the beginning of 3ABN Russia. Danny Shelton & John Carter were on the stage speaking about the beginning of 3ABN Russia & I found it odd that Danny & John were telling all these stories that were familiar to me because a few months ago I read the book The Cross & the Kremlin by Dwight Nelson. I did't remember John & Danny being in that story, but it may be that my memory is just unreliable in that. But I also found it odd that there was no mention of Dwight Nelson by Danny & John. Is there some kind of rift here or am I imagining things?

Another thing that was odd was that while Danny was making a clarification about the fact that he was speaking of both the President of Russia & about John Carter, but that John Carter was NOT the president of Russia, John made some offhanded comment about how he would make a better president than the current President of Russia. What? Did I hear it right? Olin & I looked at each other like, did you just hear what I heard? Then Olin says Danny looked at the camera & made a cutting motion at his throat to stop the feed, but when it didn't cut right away, Danny backpedaled & assured the Russians & their president that we do in fact love them etc. Then Danny started talking about something that had happened the night before, where the Governor had come to them & told them that all the Adventists had to get out of there & that they had to stop the meetings & that the building was being surrounded by armed policemen. Then, like that, the live feed went off the air & it cut to nature music for 15 minutes. When the program came back on, there was no mention of what had just happened. Does anyone know what on earth happened & what the rest of the story is?
Posted by h2ovapor at 12:42 PM 2 comments:

I'm in the mood for tea again. This is a strange phenomena because I didn't used to like tea. I thought it was just hot watery juice. Ever since I was sick several weeks ago, I've hardly wanted anything but hot things to drink. I even used up the last of of my Postum, sadly, although I've gotten several other suggestions as to what I could "replace" it with. Here is a picture of the ingredients I'm using to make tea this morning. Sliced fresh ginger root, a sliced Cutie (California Clementine), Dried Raspberries from the Vitamin Cottage, some flat cinnamon sticks, cloves & star anise. 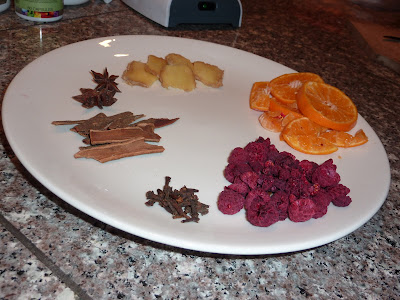 I could barely fit it all in. 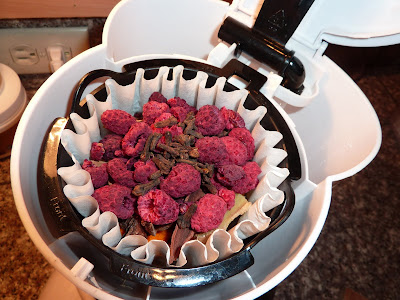 It wasn't a very strong flavor, so I decided to add a MannaBear for some extra fruityness & a little sweetness... 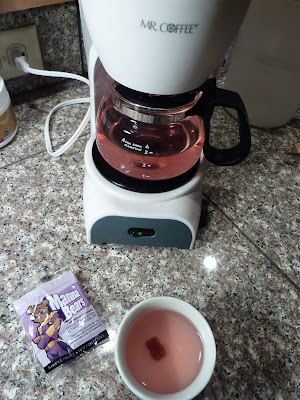 Well, the result is warm & wet & mildly pleasant. What more could you want from tea after all? 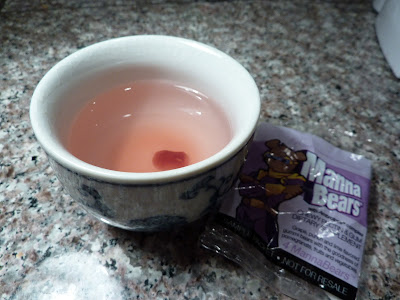 This week I went full time at work. Today was sort of a snow day. We went in to work for part of the day, though. Since Monday night, we've gotten about 3 feet of snow.

Church is canceled tomorrow due to the quantity of snow, I'm assuming. Olin was going to be teaching Sabbath School on the fruit of the Spirit: Peace. I was looking forward to it.

Now I'm looking forward to a relaxing time at home with plenty of time to read the Bible & get caught up in Patriarchs & Prophets. I've been trying to stay in the same place in both the Bible & PP, but it's not practical, so I'm just going to continue on in PP since I'm having a hard time keeping up in the Bible. I am happy to have finished Deuteronomy this morning, though. Also, will probably spend a bit of time watching 3ABN, as we are right now. It might clear off tomorrow, so there's also a possibly good opportunity for snow shoeing. Whatever tomorrow brings, I pray it will bring us all closer to our beloved Creator.

Had chili & corn muffins for supper. Yummmm... I didn't exactly measure out the recipe, just threw in the "right" ingredients. It called for some sugar, so I poured in a little bit of maple syrup since I don't like to use refinded sugar, but apparently I put a tad bit too much of it. It was still really tasty, though & Olin & I each had two bowls & had 2 1/2 corn muffins each. The corn muffins were also a little interesting, but still good. I used ground up flax seeds instead of an egg, but didn't measure those either (got quite of a lot in there). That & the whole wheat pastry flour that I used instead of all purpose, made them look kind of brown & speckled instead of bright yellow, but the taste was yummy & they rose just fine too.

It's been a rough couple of weeks in that I've lost 3 people that I knew. One was a boy that I knew growing up. He was a boy that I actually loved & dated for a short time in junior high. He died at age 28. His funeral was last Friday. I wish I could have been there for the family. I don't feel comfortable discussing all the circumstances surrounding his death & what caused it as some information should be kept private for the sake of the grieving family. However, I will say I was encouraged to hear that his brother spoke with him the day before he died & says he had made his peace with God. He was a tender-hearted soul in a lot of ways. He loved animals. I realize as much as anyone that he wasn't perfect, but none of us are.

Actually I am going to discuss a sensitive topic in case there's anyone that might be sobered up by reading it. Drugs kill. They destroyed his kidneys & his heart & made him look like death itself. I've bailed him out of jail, I've watched him throw drugs out the window while following the cops to the jail. I would like to wring the neck of the person who led him into that lifestyle. His loss is tragic & disgusting. Sin is ugly & it makes me look forward to the day when we will live in a world anew that is free of it.

An elementary schoolteacher (Mrs. Inman) died in the last couple of weeks also. I did not have any classes from her, but I know she was a kind & beloved teacher.

Also, my high school chemistry & physics teacher (Mr. Hopkins) died this week from Parkinson's. His funeral was today. I wanted to watch it online but I was at work. Broadcasting funerals on the Internet is a new concept to me. I did not know people did that. It's an interesting concept. I loved chemistry, but I hated physics. I tried to drop physics, but Mr. Hopkins wouldn't let me. I am grieving especially for my classmate Heather Hopkins, who should not have to lose a parent at such a young age.

I am grieving for Mrs. Inman's family.

I am grieving for Matthew's family. The only pictures I have of him are before we even knew each other. We met once when we were kids, before I even remembered meeting him. When I did get to know him, he hated to have his picture taken. I looked through every single picture I could find & found nothing beyond the age of about 5.

I was in a good mood when I started this blog & now it's depressing me. I think I need to go to bed. Again, I hope tomorrow will bring peace, as given by Jesus himself, & comfort to the grieving, as comes from God's Holy Spirit (the Comforter). God bless you & good night.
Posted by h2ovapor at 10:45 PM 2 comments:

So it's been over a month since I posted. Since then, I've started back working at Parelli again, part time, in the accounting department. I've worked there for 3 short weeks: the week before Christmas, the week before New Year & this week.

Today, Olin received his new Motorola Droid & has been playing with it since. We're doing the Conflict of the Ages Series Readathon & he's got the pdfs on his phone now so is chillin' in the recliner reading them.

I think it's neat that since I'm reading the Bible in 2010 & doing the Readathon, I just "happen" to be on the story of Balaam today in both places. I read the story this a.m. in the Bible & will be listening to the mp3 of the chapter in Patriarchs & Prophets this evening.

Well, it's always good to keep things short & sweet. I'm off to find some food. Happy Sabbath!
Posted by h2ovapor at 8:06 PM 2 comments: