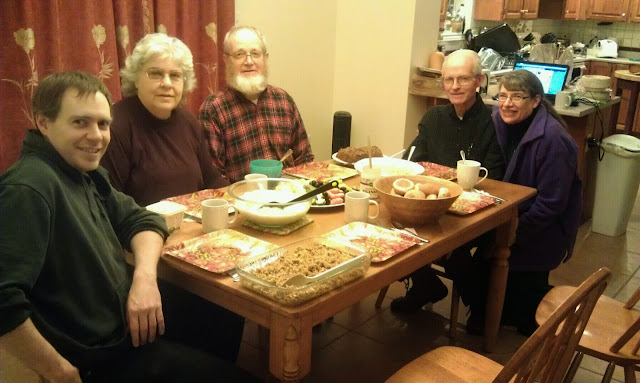 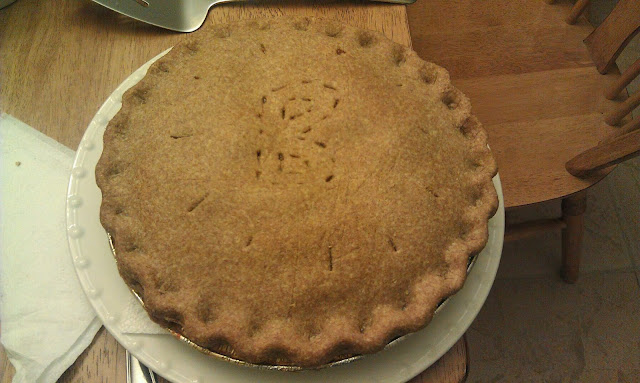 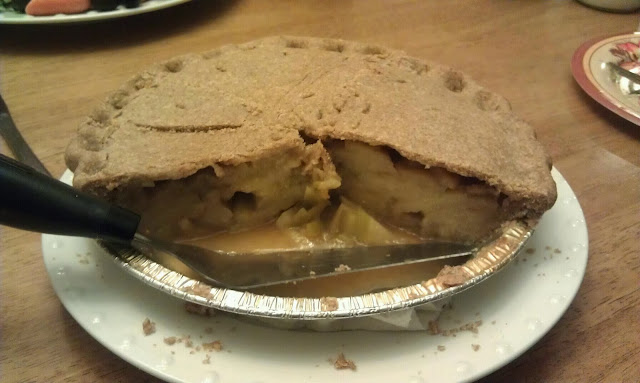 Today I want to start with gratitude. I'm thankful my phone battery is still alive (long story). Some highlights from yesterday: the teenage neighbor girls stopping by to borrow some aluminum foil (wow I think I'm lonely), and finding the box in the garage that we packed the potato chopper in (I've been looking for that). I've been struggling internally, and I thing being grateful and counting the small successes is a good place to start. That, and prayer. On that note, I'll sign off til next time. May the Lord bless you today and may you know you are loved.

So this is what I'm up to nowadays. Olin says he's gaining weight, though, and wants to start eating lighter suppers or no supper. Thankfully, this was lunch. I started at about 10 a.m. & it came out of the oven around noon, so I was happy, until we took our first bite - HOT! Maybe I need it to come out a 1/2 hour or so before lunch, so it has time to cool slightly before we attempt to eat it. Let's see, how did I make it? Well, it was my first attempt, and my go-to website is vegweb.com, so I always pull up several recipes (eight, in this case) when it's something I haven't made before.

I started a little scattered, but thankfully it all came together in the end.

Crust:
This morning I found the mixing bowl for my Blendtec Mix'N'Blend (we're still unpacking from our recent move to Maine), so I decided to make the crust in that. I put in 3 cups of whole wheat pastry flour, 1 tsp salt & mixed those up. While it was mixing I drizzled in about 5 oz of oil (5/8 cup). I then drizzled in  2/3 cup cold water while it mixed. I took it out & formed a couple of dough balls. One I wrapped in plastic wrap & put in the fridge, the other one, I took off a chunk & rolled it with my marble rolling pin between two pieces of waxed paper & smushed it into the personal cobbler dish & cut off the extra dough.

Filling:
I chopped up an onion & sauteed it in water, adding 5 cloves of garlic once the onions had cooked for a little while. Then I chopped 3 or so small carrots & two potatoes. I cooked the carrots first & later added the potatoes to 2 cups of french onion soup from a carton I had on hand. I chopped one stalk of celery & added that to the stew, along with some chicky baby seasoning, some chik'nish, some marjoram, cumin & basil. I added some whole wheat pastry flour to thicken as well as some arrowroot powder. I also added some earth balance and several scoops of Better Than Milk Soy Original powder (which I will leave out next time). I added the onions & garlic in next. I forgot to add the peas & almost forgot the salt (but added it just before I finished filling the 2nd pot pie). Once the stew was done, I filled the cobbler dishes, then I rolled out some tops for the pot pies & pinched the edges & scored the top. I baked them at 350 degrees for 30 minutes. Below is the finished product. Click the pictures to see a larger view of them. 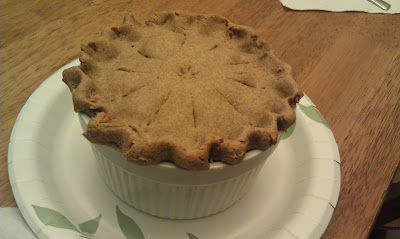 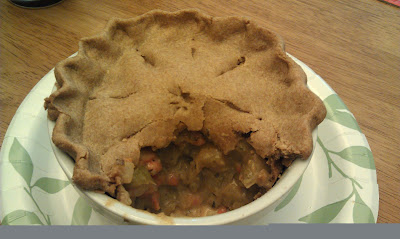 Soup in a Bread Bowl

So I found this recipe: Copycat Panera Black Bean Soup Recipe and tried it out on Olin, much to his delight (he LOVES Panera). He said he would eat this meal every day. We had it with a chocolate chip cookie, some grape juice and salad that was topped with grilled tofu and some homemade avocado cucumber dill dressing. Here are the pictures: 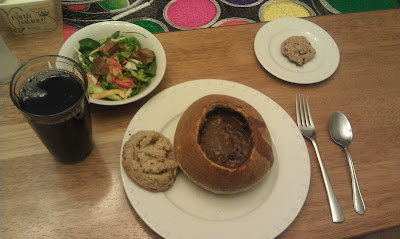 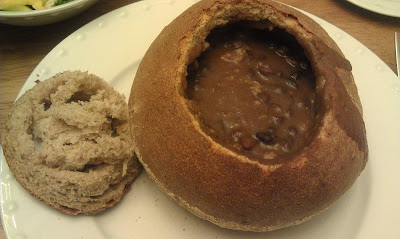 It's been a tumultuous year so far. Earlier this year, things at P started going downhill, leading to my moving on. I got a great new opportunity at N, but after 2 1/2 months there and one big cross-country move from Colorado to Maine, I decided to be a housewife. It seems crazy to sum it all up in just 3 sentences like that, but there it is. Anyway, today I took some time out of unpacking to experiment in the kitchen with a salad dressing, so here's what I threw in there so that I don't forget:

It turned out a bright yellowy green, and was quite tasty, although O said it could use more salt.

We had it on a salad with some cooked tofu and that was our supper. Also today, we went for a drive up on top Cadillac Mountain (didn't think to wear a hat & it was COLD). Below you can see how our two tripod-assisted selfies turned out since we finally hunted down the mini-usb cable. By the way, I am very happy with my current situation and I thank God for this opportunity. Life has been a struggle for the better part of a year now, but I've gotten some closure on a few things that were haunting me, so I'm feeling a lot of peace and freedom now. 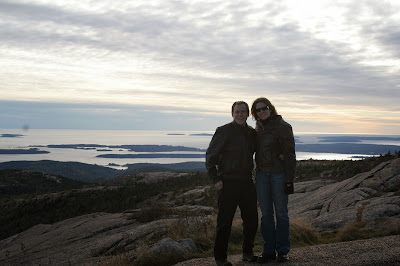 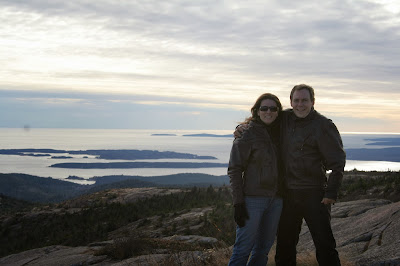